Windows 93? No, obviously there was no such operating system developed by Microsoft, but in the case of an intermediate version between Windows 3.X and Windows 95, it could have been similar to the artistic project developed by Jankenpopp and Zombrecto , in an authentic exercise of Computer science fiction, or at least we would have liked it to be .

The project shows us the web version of an imaginary operating system that comes with dozens of surprises that will make the most nostalgic sketches a smile remembering old times and will let loose some laughter with the occurrences of its creators. From the typical image of the Playmate Lena Söderberg that many of us have used as a test image in a class of image processing, to the simulator of a classic chat room, to a version of Skype that would still work with cassette tape, an explorer Of files based on Dora the Explorer or a virtual PC, in which we can open a desktop inside another and so on in the purest Inception style . The colorful interface of the system does not seem very suitable for epileptics.

The idea is that each one accesses the Windows 93 website on their own and discover for themselves each of the hidden options, there are more than 30 shortcuts to all kinds of functionalities on the same desktop, as well as a multitude of games, Images and hidden programs among different system files. And if you explore all these options with the full-screen browser (by pressing F11) , the experience will be much more immersive, as it will appear that we are operating a real operating system. But as not everyone has the patience to go diving between the different programs and shortcuts available, here we tell some of the features of the applications that have caught our attention. Watch out, spoilers come!

The Most Striking Windows 93 Apps

The typical icon of My PC labeled Windows 93 gives us access to a command line from which we can run the different programs included in the operating system, in addition to being able to apply effects to our screen. Commands like Rotate or Acid will make our screen rotate ninety degrees or make us watch the screen as if we had abused LSD. 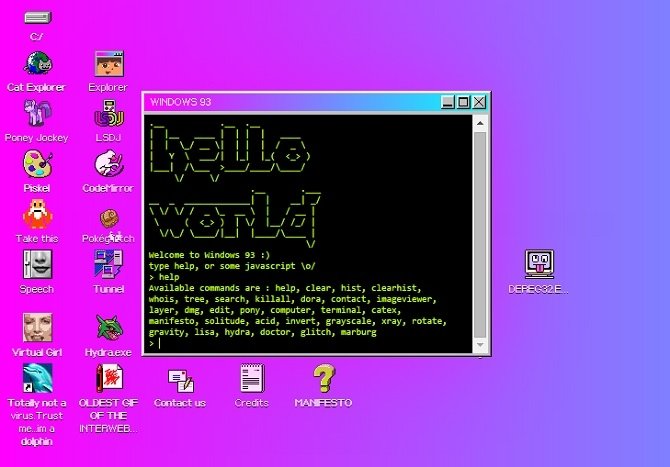 The browser of this version of Windows, which claims to honor Nyan Cat, far surpasses any Internet Explorer that we have tried, although thinking about it, running Cat Explorer within Internet Explorer would probably cause a hecatomb. The default search engine is Ixquick , the search engine created in 1998 by David Bodnick, and at the top of the navigation window, we have access to a series of markers that take us to dozens of sites that certainly do not follow the paradigms of More modern web design. 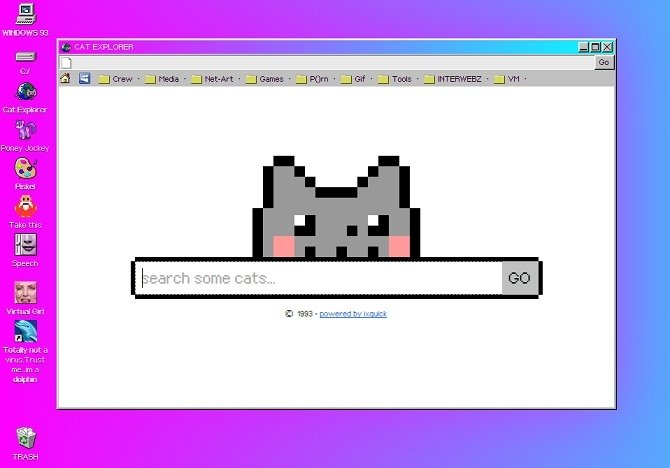 The Windows 93 image editing program tries to simulate the photographic editor developed by Microsoft, but as it could not be otherwise, it is practically impossible to make a program as impractical as Paint, Piskel is more like an old Photoshop than even Has the possibility of working in layers, something unthinkable in the official version of the editor that comes by default with all Windows. 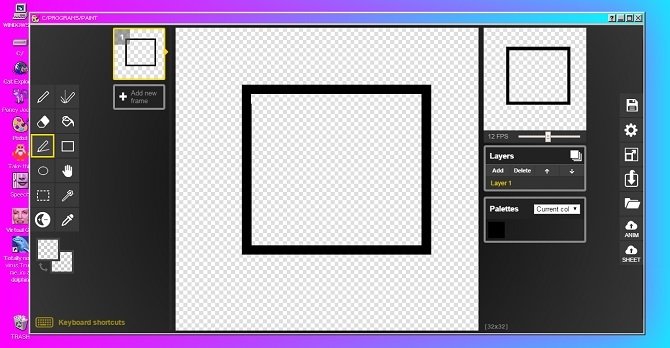 This option places a virtual girl who responds to Lisa’s name in the lower right corner of the desktop. Do not click on it or try to move it to any other part of the interface, because it simply can not. It only serves as a decorative element on our screen, but we were happy to mention this functionality.

This is possibly the Windows 93 feature that more work carries back. It is a version of the 1977 film completely recreated in ASCII characters. A true masterpiece, in which we can relive the adventures of Luke Skywalker rescuing Princess Leia recreated with 95 printable ASCII characters. 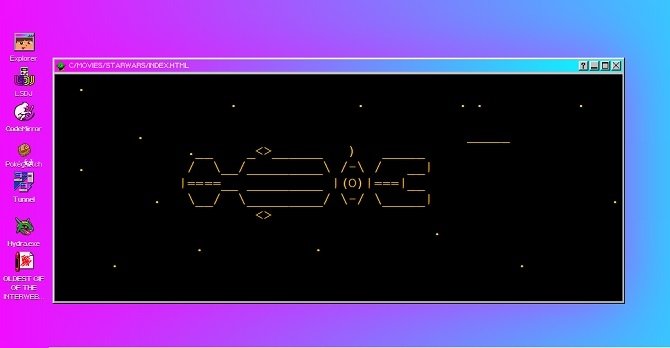 This icon gives us access to the typical shooter of another era. We will have to walk through a labyrinthine scenario using the arrow keys and shooting our enemies with the space bar. The game goes beyond having the retro look that has been so fashionable lately and makes us wonder how it was possible that we entertained with such games at that time. 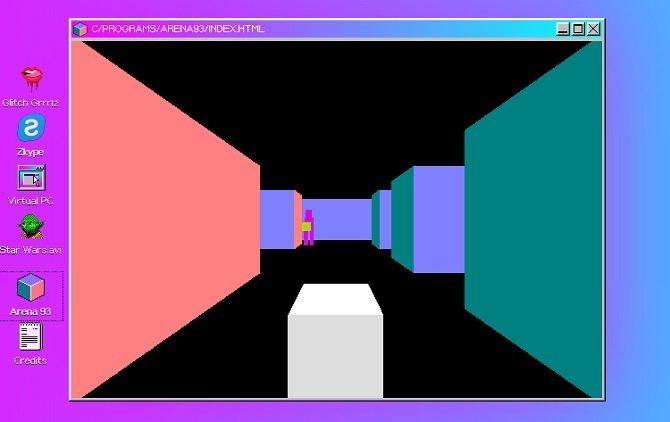 I could not miss a graphical adventure in Windows 93 and Robby pretends to be, although adventure has little, and graphics even less. In this game, we will play a character drawn with sticks that pretend to dock a bank, and in which our movements will be quite limited, if not totally null. 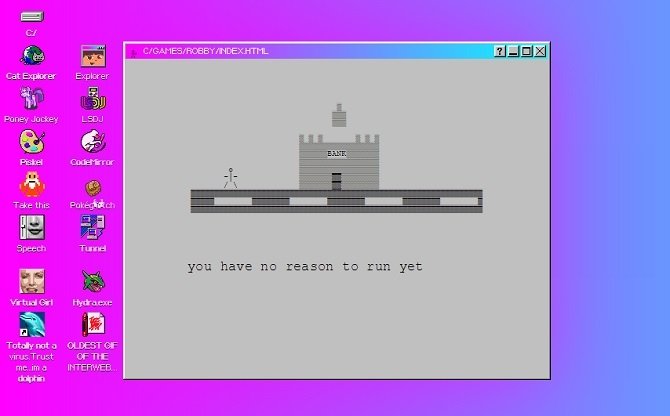 This tool tries to simulate the typical disk defragmenter, but with a surprise, we can play a kind of Serpent, so characteristic of the Nokia mobiles with which to hang out while the defragmentation is complete. The music of the game will transport us to our youth with a version of this somewhat different game in which everything is allowed, from crossing walls to crashing against our own tail. 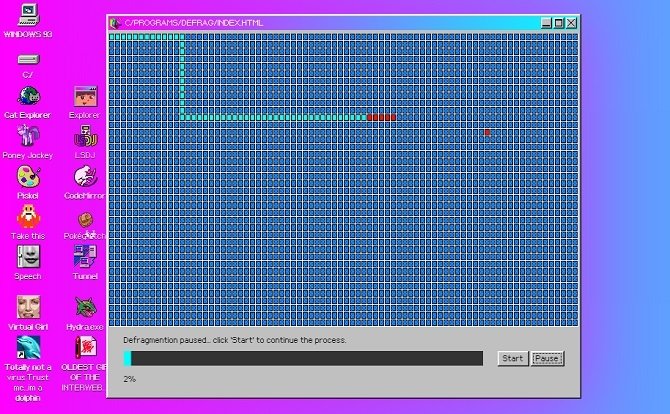 In addition to the previous utilities, our Windows 93 comes with three different viruses: Hydra that will fill our screen with annoying windows and every time we close one of them will appear two new, in the same way that happened to monster of Greek mythology when cutting head; DEREG32 that simulates the famous Marburg virus of the 90s filling our screen with pink blades impossible to close; And finally the icon of an adorable dolphin that promises not to be a virus , but as you can imagine doing some irreversible action on our desktop, in this case causing all shortcuts to fall from its place on the screen, finally disappearing Of the same. 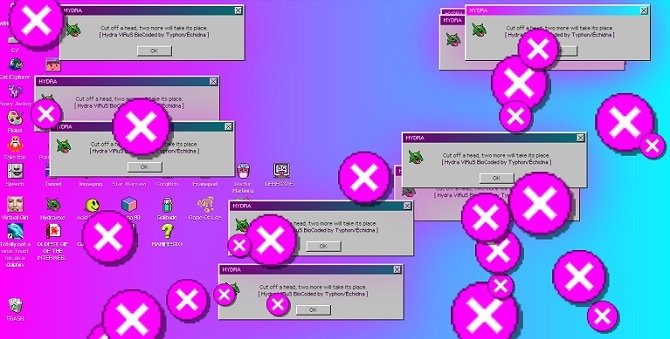 One could be for hours discovering new features of Windows 93, to such an extent that it is impossible to list and explain them all. In fact, some of the functions of this online operating system change every time we access it . As an example, the icon Take This that can randomly show us images as disparate as a kitten, a character receiving a lock or the same Doctor House every time we open it.

Of course, we recommend that you do not start doing probes in Windows 93 until you have finished with all the work of the day, because you will stop being productive from the moment you access this operating system.